Jesse Brown, PhD - Assistant Professor
Jesse joined the Seeley lab in April 2013. He has a PhD in Neuroscience from UCLA, where he worked with Susan Bookheimer and the Center for Cognitive Neuroscience. He has a BA in Cognitive Science from UC Berkeley. His graduate work focused on MRI-based structural and functional brain network analysis, applying these techniques to understanding patterns of whole brain network alteration in individuals with genetic risk for Alzheimer's Disease. He is currently developing new neuroimaging connectivity methods to monitor the progression of neurological disease spread over time. He is also working on advancing brain image visualization using gestural interaction.

Lorenzo joined the Seeley lab in November 2016 as a postdoctoral fellow. He graduated in Neuroscience and Public Health at the Ludwig-Maximilan University of Munich. He obtained a PhD from the Technical University of Munich, where he worked under the mentorship of Dr. Christian Sorg at the Neuroimaging Center, studying large-scale brain network dysfunctions in Alzheimer’s disease, with a specific focus on multimodal neuroimaging and intrinsic activity of the medial temporal lobes. Among other projects, he has collaborated with the Psychiatry Department of King’s College London on a project investigating neurological determinants of dementia in low and middle income countries (10/66 Research Group), and with the Brain Institute in Natal on a fMRI project investigating the effects of the psychedelic substance Ayahuasca on brain activity. Lorenzo’s main interests are to investigate the link between neuropathology and neuroimaging, and to develop subject tailored neuroimaging biomarkers for frontotemporal dementia. 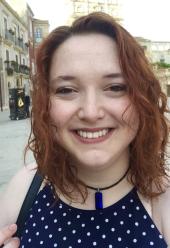 Kristen Fernhoff - Research Associate
Kristen joined the lab in January 2022 as a research associate. She assists with neuroimaging data management and analysis. She received her B.A. in Psychology from Washington University in St. Louis where she volunteered in the Cognitive Control and Psychopathology lab. After graduation, she spent three years as the lab coordinator for a lab at The Ohio State University researching the effects of parent-child interactions on the outcomes of children with ADHD.